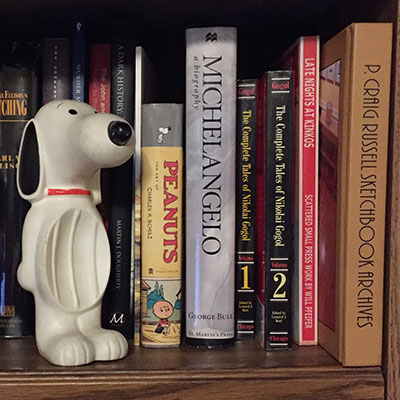 John Nagridge, a graphic designer and painter born in Detroit in 1961, took his first steps in art as a six-year-old boy. Back then, his Snoopy soap dish was the subject of his artwork. Today he’s an accomplished illustrator, printmaker and painter. He studied art at Macomb Community College, the Center for Creative Studies, and Wayne State University, where he earned a Bachelor of Fine Arts with a concentration in Printmaking and Drawing.

His drawings, etchings, woodcuts, and paintings have been exhibited in various metro Detroit galleries, including the Detroit Artists Market, The Michigan Gallery, the Chaika Gallery, and the Scarab Club. One of his woodcuts was a recipient of the David Groff Purchase Award from the Alma College Statewide Print Competition in 1987. It was later exhibited in 1991 at the Detroit Institute of Arts for the OMAP (Ongoing Michigan Artists Program) show, A Decade of Michigan Printmaking. He took First Place Emerging Artist at the Paint Dexter Plain Air Festival.

He currently lives with his wife and two cats in Royal Oak.

“I prefer painting landscapes plein air, as opposed to using photo reference. It encourages me to interpret the world around me, rather than copying it.

I work almost exclusively in oil with painting knives. Knife painting keeps me from getting too bogged down in fussing with details. This method’s freer nature gives me more room to concentrate on expression, and on what impacts me most about my subject matter.

Michigan’s Lower Peninsula never leaves me at a loss for inspiration. I’ve captured scenic landscapes of the harbor towns in Michigan’s upper thumb to small quaint cities like Milford and White Lake to my neighborhood in Royal Oak.”